Founded in 2012 and based in New York City, @Spotflux follows the mission of putting its customers first on the internet by creating tools that protect privacy, while still retaining unlimited access to all parts of the internet. Having acquired over one million dollars in initial capital funding, it is clear that many people had faith in not only the mission but the product as well.

We tested Spotflux to see if the investors are on to something or if this young company is just another flash in the pan.

Spotflux provides standard VPN services like data encryption and location masking. They currently have a meager seven international VPN servers and three domestic (based in the USA) VPN servers. Compare this with IPVanish’s 750 servers and it’s almost embarrassing that this is what the software offers paid users.

Some value-added features include protecting users from malicious websites and mobile data compression, which works by limiting your overall mobile bandwidth to prevent you from going over your allotted data. These features have a questionable amount of relevance considering most users will already have some basic internet protection in place. Additionally, the data compression is less relevant now that most service providers have unlimited plans. 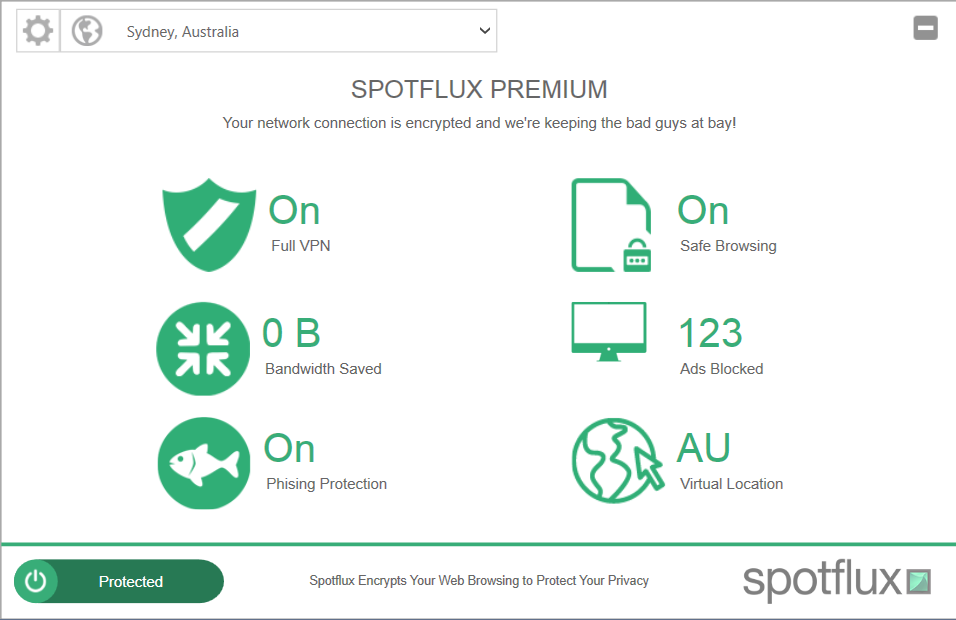 The Spotflux application is well built and easy to use. With a simple green on white color scheme, the app tells an average user everything they would need to know including how much bandwidth was saved and how many ads the program blocked. The VPN is activated with a simple switch on the bottom of the app, and you can change your virtual location using a drop-down menu on the top.

Although the app was clearly designed for the most basic users, we were disappointed that we did not have access to more information that advanced users would find interesting or important. We like simplicity, but not at the cost of features.

The information collected by Spotflux Premium users is only used for internal purposes. According to their privacy policy, however, the company reserves the right to utilize your information to serve you third party ads and promotional materials.

Spotflux keeps “limited to no logs,” which they release if directed to do so by a court. Additionally, the company cooperates fully with law enforcement and will quickly divulge your information if necessary.

This kind of nonchalance with your privacy should be concerning, as should the fact they the company is based in New York and is forced to abide by the laws of the United States government.

Spotflux uses a 128-bit encryption key. This is less than the 256-bit encryption now offered by most serious VPN providers and is far less secure. Spotflux offers some good tunneling protocols like PPTP, OpenVPN, and L2TP/IPSec, however.

The speed of the service was slow and at times unbearable. Video stuttered and even loading simple websites took longer than the average VPN might.

Our tests resulted in some less-than-ideal results. We were unable to connect to Hulu from abroad and our connection dropped several times while using location-based streaming services like BBC. Torrent downloads are also impossible while the service is active.

The Spotflux website has a knowledge base that covers most questions and concerns you may have when using the service. If you want to contact customer support, there is a contact form on the site, but we were unable to find an email address to message them directly.

Spotflux premium costs $29.99 per year for a mobile-only plan. Unfortunately, the button to sign up for the less expensive plan did not work when we tried to sign up! Instead, we were brought to a checkout page that offered an annual subscription for $37.99 and a monthly subscription for $4.99.

We were really disappointed by Spotflux. It’s a service that claims to be concerned with privacy, but which does not guarantee it at all. Additionally, we were unable to access even some basic parts of the internet and when we could the service was slow and unreliable. We cannot recommend this software in any sense, but we hope that our future reviews show a vast improvement. Until then, check out our top VPN picks.